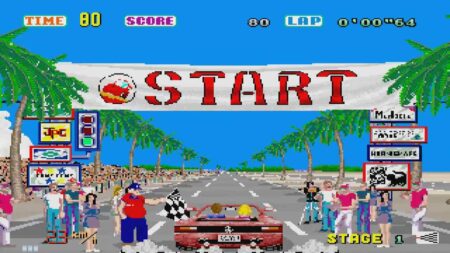 Everything about this arcade machine is very special indeed. Not only is Outrun one of the very top arcade racing titles, but this deluxe hydraulic version of the machine is very rare to come by and easily the best way to experience the game.

Released in 1986 by Sega it was seen as a technological breakthrough in racing simulation. The designers cleverly made a large portion of the screen the horizon and backdrop of the area you were driving in, which enabled the hardware to reproduce the ever-changing track at much higher speeds, with better graphics than ever before. Combine this with an excellent soundtrack, where you could choose the tune to drive to via your car radio it was always going to be a hit. 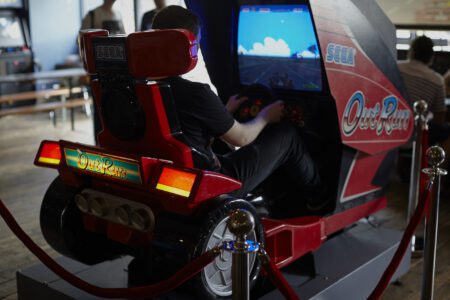 Our deluxe version is the full experience. Bucket seat, speakers behind your head and of course it moves! In fact, when the tight corners become frequent the machine really starts to throw you around. The fact that we managed to pick up this outstanding condition example of the ultimate edition of the game, from a police auction where a drugs gang had been busted and their playboy mansions’ worth of big boys’ toys sold on behalf of the state, it just adds to the overall drama of the machine. Get in the seat and put your pedal to the metal!