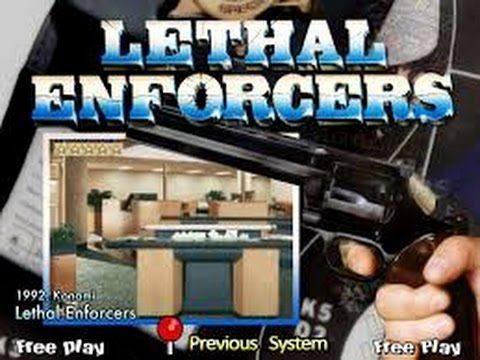 Take control of Don, a donut-loving Chicago cop, to put the end of crime-spree that’s putting the city at risk.

A popular light-gun shooter from the early 90’s, Lethal Enforcers became one of the games that helped shaped the genre that led to Time Crisis and Point Blank in the later part of the decade.

As a first-person shooter, you actually have to avoid friendly fire to only shoot the bad guys. Aside from an assumed lifetime of guilt, shooting civilians and fellow cops prevents your character from achieving the next rank, a kind of promotion/levelling up. You can also upgrade your weapons throughout the game to the point where you can use a grenade launcher (although it has only one use).

Lethal Enforcers was infamous after release in the US, ranked up with Doom and Mortal Kombat as having too much violence for children. Despite that, many home versions were released, and any toning-down of the original violence is now looked down on.